Places of interest to visit in Pak Chong and Nakhon Ratchassima/Korat province.

Pottery Village
In the old days, local people of the district made different types of pottery from the clay from the banks of the Moon River.Today product ranges have developed to home and garden decoration.
Situated on Highway No. 224, about 14 kilometers from the city of Nakhon Ratchasima/Korat,Dan Kwian is a village noted for a unique pottery widely used for interior and outdoor decoration. The uniqueness of Dan Kwian black bronze coming from the Moun River clay is its durability, pliability and rusty color.

Dan Kwian Pottery is famous all around Thailand but much cheaper from the source in the village itself. The wholesale earthenware district is a prime place to pick up pots, vases, jars and garden accessories for less than Bt100 a piece. Open daily.

” Situated in the Pak Thong Chai district of Nakhon Ratchasima province, the project area initially covered 600 rai (about 96 hectares/237 acres).The Jim Thompson Farm was opened to the public for the first time in 2001 and has since evolved into one of Isan’s most popular agro-tourism and eco-tourism attractions. It is open to visitors only once a year during the peak of the cool season.

The Jim Thompson farm tours provides a unique opportunity for visitors to observe up close and personal the full life cycle of the silkworms and the silk farming process as part of the Isan way of life. Other highlights include a tour of the vegetable plots and ornamental plant nursery.
The Isan and Khorat villages are star attractions featuring antique houses unique in architecture and in pristine condition.”
(Adults Baht 60 and Children Baht 40). 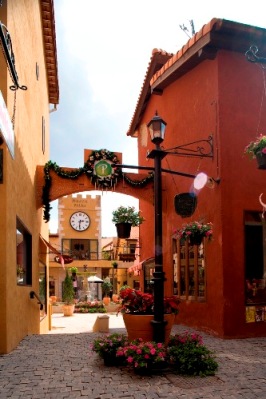 Outlet village Khao Yai
Outlet shopping mall for various locales and licensee international fashion brands, past seasons at discount prices. the Outlet is located on Mittraphap Rd., it host as well a Starbuck coffee and various restaurants, open daily from 10.00 to 20.00.

Palio
The latest popular addition to the area, the Palio walking street mall offers a range of 100 stores in an “italian street” setting, offering all kind of products, fashion, beauty, decoration, design, restaurants, bakeries. Palio is located on Thanarad road in Mu-Si, next to the Juldis Hotel. Open Daily from 10.00 to 20.00

PB Valley offer vineyard and winery tour daily, 3 times a day, with a tour guide which will explain you their history, details and of course a wine tasting at their cellar door at the end of the visit ( 200 Thb). A package with a Wine tour, a wine tasting and meal with a glass of wine is also available and start at 730 Thb per head. a non-alcoholic version is available for children.

GranMonte Estate
GranMonte estate is another large vineyard located in the Asoke valley, adjacent to the park and covering around 100 rai. The GranMonte wine are made of two grapes variety, Chenin Blanc and Syrah & Chenin Blanc.

GrandMonte offers year-round activities (ie. annual Harvest in February and Wine Festival in October). Complimentary tours can be arranged by prior arrangement on weekend only.

Farm Chockchai
Today, Farm Chokchai runs a substantial dairy farm with over 3,000 head of dairy cattle, a breed bred exclusively by Chokchai Farm. The species is Chokchai Friesian which was developed by crossbreeding Holstein Friesian (about 93%) and a native Thai species (7%). Originally, Farm Chokchai was solely an agriculture venture in a country deeply rooted in farming. Farm Chokchai continues to evolve from a well-established agriculture business into a dynamic company that now includes a vibrant customer-centered service division. Today the farm Chochai setting along Mittraphap Rd. have developped into a full attraction park dedicated to agro-tourism and Thai awareness about farming.

Besides the restaurants and ice cream parlors, you will found there plenty of attractions with their agro-tour: get the real feel of the farm life by seeing and learning through experiences such as milking cow, making fresh milk ice cream, seeing cowboy live shows, dogs rounding up sheep, dogs showing their skills, visiting a nursery, an ATV short track, farm visits and more… 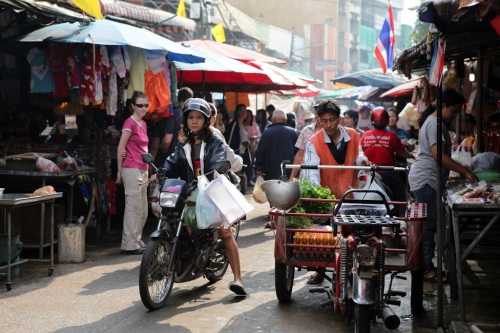 Pak Chong morning market
Pak Chong ‘s morning market is in the heart of the Pak Chong town.
Pak chong Market is a ‘fresh’ market, raw meat, seafood, vegetables are offered there at low prices. It s a good shot for a tourist who wish to see a traditional Thai market in upcountry. Everyday from 6 a.m

Pak Chong night market
Every night you will have unique opportunity to test local delicacies at the night market. Lots of vendors and their carts offering delicious snacks, barbecue on the go, gorgeous desserts and all kind of meals to eatand samples. Pak Chong was originally a market town and it worth a visit to experience all kind of great food.
Every evening in the town center 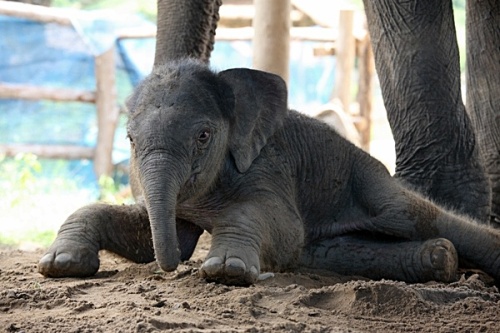 The Thai Elephant Research and Conservation Fund (TERF) is an Ngo based in Khao Yai, along Thanarad road in Mu Si, it’s a good idea to stop there and even make a donation.
The TERF work on different projects through Thailand, their main missions are:
-Conservation of Thai elephants through interdisciplinary research and use of traditional local knowledge 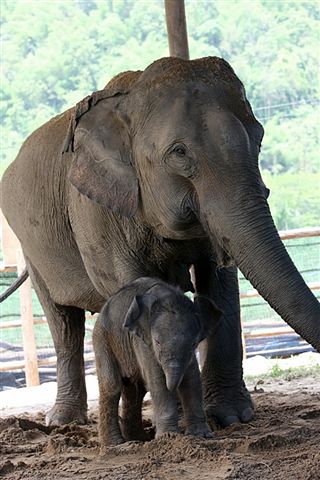 -Enabling public participation in elephant conservation through education, awareness raising and encouraging positive action.
-Working with others from Thailand and around the world for the benefit of Thai elephants.

Located in the Khao Yai TERF on Thanarad road,  TECC is home to a small population of domesticated Asian Elephants, together with their mahouts. The main objective of TECC is to provide these ‘streets elephants’ (chang baan) better life conditions while offering their mahouts instruction and the opportunity to be part in the awareness raising efforts required to address the critical situation of Asian elephant conservation within Thailand and Southeast Asia as a whole.
TECC propose activities as well; such as riding elephants, giving fruits and food, in order visitors to raise donations or sponsorship for further purposes of The Elephants Center for Conservation.

The TECC, Mahouts Life Enhancement Project has as mission to improve Mahouts’ Life Quality through participation in knowledge gathering and creation activities, alternative and renewable energy research and development projects, and providing welfare support to their families.

Links:
Bring the Elephant Home and the forest program in Khao Yai

Phimai National Museum is in Phimai, about 60 kilometers from Nakhon Rachassima, on the road to Khon Kaen. The museum display a collection of arte-facts and information on the cultural prosperity of ancient Isaan. Arte-facts found in the lower North eastern Thailand are displayed here, including pre-historic items like pottery, tools and stone ornaments. Arte-facts from later periods include stone temple boundary markers from the Dvaravati period, Khmer building parts, and a bas relief of King Jayavoraman VII found at Phimai Sanctuary, the museum’s most outstanding exhibit. The Phimai museum is open 9.00 a.m. – 4.00 p.m. daily.

The Museum exhibitions are divided into 3 parts: Part 1 : Second floor exhibition. This exhibition shows the development of communities in the lower part of northeast Thailand from prehistoric to recent periods.
Part 2 : Ground floor exhibition. This exhibition shows the archeology and history of the town of Phimai. It includes the town environment, the construction of Prasat Phimai during the 11th – 13th centuries, and evidence of the flourishing religion, culture and economy of the time.
Part 3 : Outdoor exhibition. This displays sandstone objects used in the construction of Khmer temples such as Prasat Phimai. These includes lintels, door columns, motifs, lotus bud-shaped crowns (the apex of the tower) and miniature tower. 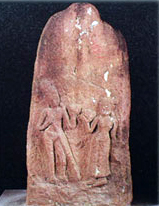 Cultural Center of Nakhon Ratchasima Rajabhat Institute is at Saranarai Road. The center has a good collection of images and history of historical sites, as well as information on ancient arts, tools and currency. It is open during government office hours.

Maha Wirawong National Museum is opposite the Provincial Hall in Khorat. The Maha Wirawong museum has on display artifacts found in Nakhon Ratchasima and nearby provinces such as stone Buddha statues from the Khmer and Ayutthaya periods, earthenware, bronze Buddha statues and woodcarvings from an ancient temple. It is open during 9.00 a.m. – 4.00 p.m. from Wednesday to Sunday. It is closed on Monday, Tuesday and public holidays.

Old Khorat City is 32 kilometers from the present city. The old city of Sema is a city from the Dvaravati period that is 37 kilometers from Nakhon Ratchasima city. Only a wall-like earth ridge remains. However, an important artifact stored at Wat Thammachak Semaram is the reclining red sandstone Buddha image that is the largest and oldest in Thailand. The image is 13.30 meters and 2.80 meters high. It was built around 657. There is also a Buddhism wheel sculpted from a large boulder.

The Phimai historical park protects one of the most important Khmer temples of Thailand. It is located in the town of Phimai, Nakhon Ratchasima province, about 60 km from Khorat city.

The temple marks one end of the Ancient Khmer Highway from Angkor. As the enclosed area of 1020x580m is comparable with that of Angkor Wat, Phimai must have been an important city in the Khmer empire. Most buildings are from the late 11th to the late 12th century, built in the Baphuon, Bayon and Angkor Wat style. However, even though the Khmer at that time were Hindu, the temple was built as a Buddhist temple, as Buddhism in the Khorat area dated back to the 7th century. Inscriptions name the site Vimayapura (which means city of Vimaya), which developed into the Thai name Phimai 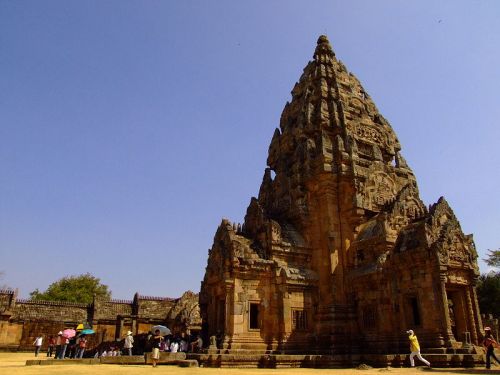 Prasat Hin Phanom Rung (Phanom Rung Stone Castle), is a Khmer temple complex set on the rim of an extinct volcano at 1,320 feet above sea level, in Buriram province in the Isan region of Thailand, about 120 km from Khorat city. It was built in sandstone and laterite in the 10th to 13th centuries. It was a Hindu shrine dedicated to Shiva, and symbolises Mount Kailash, his heavenly dwelling. (Phanum Rung complex map)

Located 44 km from Khorat, the cave is located on a back yard of  Wat Khao Chan Ngam. The cave paintings are dated from 3000 years ago. We can found there, paintings of men, women, children in various actions, such as sitting, dancing, standing with a dog, and firing arrow with bows.
The bodies themselves are clear to see with the calf section distinctively large.